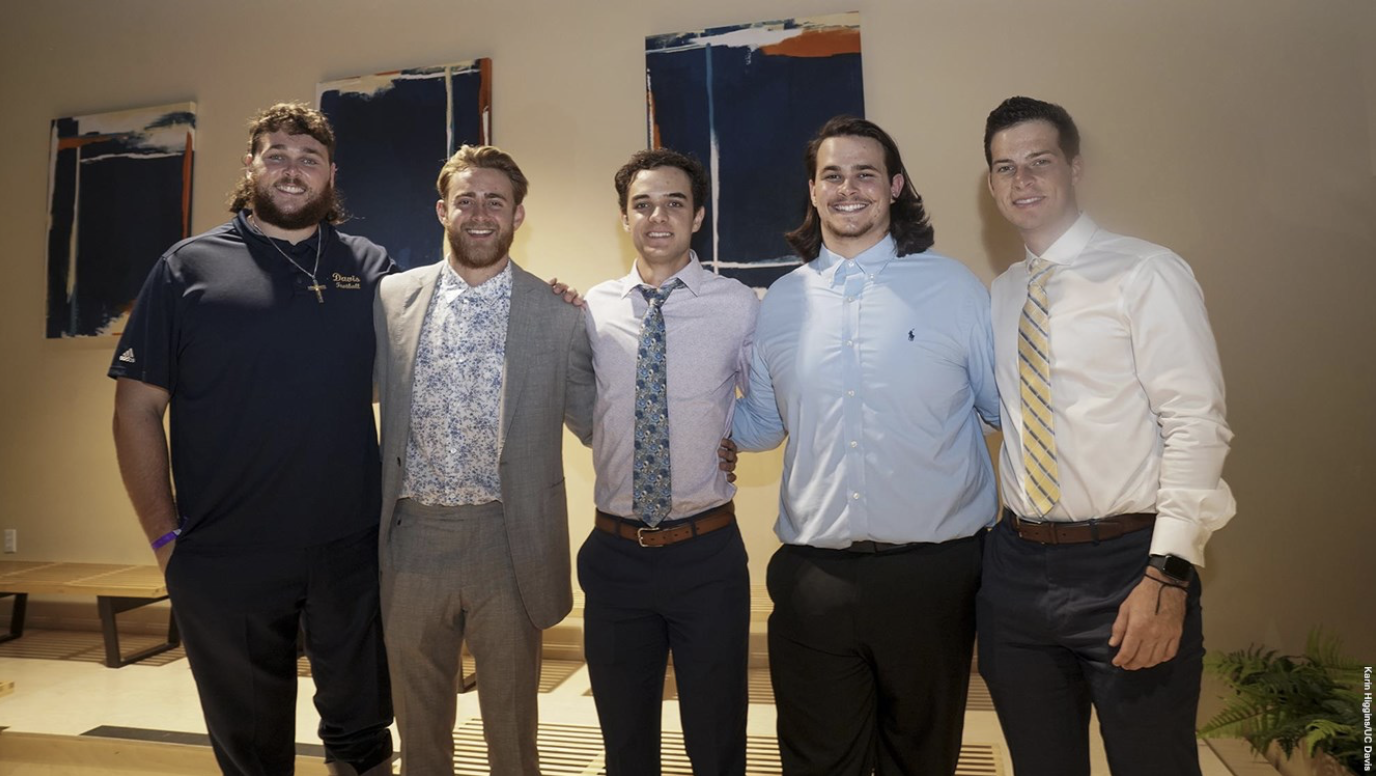 DAVIS, Calif. -- To any college football player, Saturday is game day: the culmination of an entire week's worth of preparation, training and strategy. In contrast, Sunday is the day of rest, an opportunity for mind and body to reset before the cycle repeats in advance of the next Saturday on the calendar.

To Hunter Rodrigues, a third-year human development student and a quarterback for the UC Davis football team, his Sundays bring a different level of fulfillment. Through the Greater Sacramento chapter of Young Life Capernaum, he spends that day brightening the lives of special needs children in the area.

"It's the highlight of my week, every week," Rodrigues said. "No matter what's going on, no matter how stressful life can get, there is no limits of love for all of those kids."

For that matter, this Saturday offered Rodrigues a different type of culminating event from a normal game day. On his first weekend of the team's winter practice season, he and four teammates – fellow quarterbacks Brock Johnson and Miles Hastings, and offensive linemen Kaden Richardson and Kooper Richardson – volunteered as dates for the inaugural Shining Stars special needs prom, held at the Destiny Community Center in nearby Rocklin.

In short, Shining Stars is a prom for teens and young adults with special needs. Thanks to an estimated 125 volunteers, the guests were treated to a gala event that featured a red-carpet entrance, professional prom portraits, food and beverages, hair and makeup, corsages and boutonnieres, plus a "Parent Lounge" for parents who wished to remain on site.

Rodrigues is no stranger to such a prom, thanks to the elder Richardson brother. Kooper Richardson volunteered at a similar prom called Evening of Dreams for six years, and more recently has invited a group of Aggies to join him. Rodrigues was part of that football crew in attendance at the 2018 and 2019 EOD events.

While Rodrigues credits Kooper Richardson for introducing him to EOD, but it was Hunter's girlfriend, Jacquelyn, who got him involved with Young Life Capernaum. The couple remains active with the program, so much so that the organization's website (gsc.younglive.org) features a photo of Rodrigues surrounded by his fellow Capernaum volunteers and special needs friends. With Evening of Dreams not running in 2020, Shining Stars rose in its place.

Rodrigues also appreciates the importance of being a relatively high-profile figure – i.e. a Division I student-athlete – giving back to this community.

"When you have a name or something where people are watching your every move, you want to make a positive impact on the community," he said. "Everyone wants to do it, too. It's not like they're being forced to. We're getting the right guys who want to do it."

Shining Stars organizier Dan Adragna is certainly no stranger to the notion of serving the community. He serves as an area director for Joni and Friends, a non-profit for people with disabilities; and previously worked as a special needs minister with the Roseville-based Bayside Church. Adragna's supervisor, Andrew Allen, is the high school pastor for Destiny Church, the host of the Shining Stars prom.

And if there is one figure who links the old Evening of Dreams prom to Saturday's Shining Stars, it is Colleen Short, who Adragna describes as his "co-director." Short ran Evening of Dreams at the Capital Christian Center for the previous nine years, and brought both her expertise and a team of 30 volunteers – including the five Aggie gridders – to assist Adragna in his inaugural event. Not coincidentally, Short also serves as the regional director of Young Life Capernaum, for which Rodigues volunteers each Sunday.

Lucille's BBQ provided the food for the prom, the Hoss Lee Academy beauty school provided hair and makeup for the female dates, while the Men's Wearhouse provided all of the young men with a substantial discount on their tuxedos.

That amount of community effort makes the Shining Star a truly enjoyable event for the guests and volunteers, including Rodrigues. "It doesn't seem like community service, he said, "it's just fun to do. Everyone is going to have a good time and to give the dates the best nights of their lives."