Aggie quarterback Brock Johnson  has developed a large following for his social media endeavors off the football field. 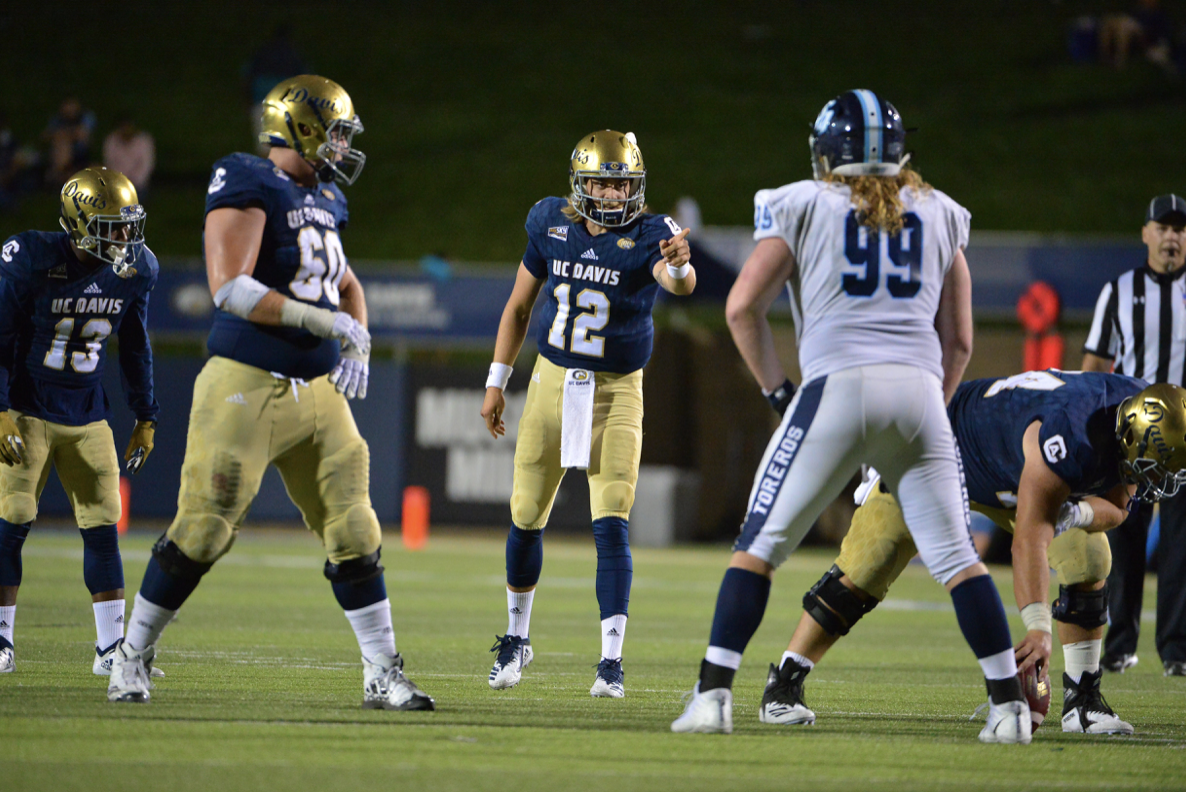 Next time you think about making fun of a communication major, consider there’s one on the UC Davis football team that’s likely already making more money than you.

Often working from the comfort of his own living room or the front porch of his Davis apartment, Aggie quarterback Brock Johnson has connected with millions of people over the past several years — via social media.

The self-dubbed storyteller has developed a growing following of nearly a quarter of a million users on the platform TikTok — and another 38,000 and counting on Instagram.

The name of the game? It’s being relatable, according to Johnson, who says one of his first serious projects was creating an online course called Unwrap Snap, designed to help parents and adults better understand how to use the app SnapChat and keep their children safe on it.

“At that time (Snapchat) was gaining popularity and growing so fast that not a lot of people knew how to use it,” Johnson says. “So I created (that) course and that very quickly shifted into how small-business owners could use Snapchat to market.”

Years later, he’s now facing down the home stretch of his college career. Wrapping up his third season in Aggieland this spring, the 6-foot-2 Mission Viejo High grad often starts his days well before sunrise.

“It’s a very, very detailed schedule I have to keep,” the 2015 all-CIF and Orange County Player of the Year explains. “It keeps me alive.”

A man of faith, his early mornings often begin with devotionals before heading to football weight training, then on to running or throwing sessions. If that’s not a full day, then Johnson is off to lengthy film review and strategy sessions before three-to-four hours of class time, followed by studying.

His work-work, however, begins after all his student-athlete responsibilities.

With five active online courses available, he says his target demographic tends to be 35- to 55-year-old entrepreneurs.

“A lot of people that are older than me,” he says. “I work with lots of moms who are doing things from home, people looking to create a side or passive income while still having another job and a lot of small business owners.”

At the same time, he’s constantly producing content for his own social media channels — covering a variety of topics ranging from health to audience engagement.

“Weekends are huge for work,” he adds. “Then I can sit down and batch-produce content, so I’m not doing it all as the week goes.”

He’ll then dribble out posts during opportune viewing windows over the next several days.

But why social media, while most of his classmates and teammates have standard office jobs?

Johnson credits his parents, Bret and Chalene, for introducing him to the ins and outs of the industry. The couple of 24 years are online influencers themselves, the younger Johnson explains, calling their line of work “all-encompassing.”

“They’re trying to help people live their best lives,” he says, adding: “Be that through marketing and social media or work strategy.”

Between their motivational speaking, podcasting and work as fitness gurus, together the elder Johnsons have built and sold several multimillion-dollar lifestyle companies.

“The short answer is they’re entrepreneurs,” Brock adds. “But the long answer is I could write a book about everything they do.”

The coolest thing about his role models, he says, is the fact that “they’re the same people online as they are off: genuine, authentic, good people.”

When he wraps up school in the near future, Johnson looks to follow in the footsteps of his parents and expand his work with social media. Having set a life goal to always be his own boss, right now he loves getting to set his own schedule.

And as digital media continues to evolve, he’s excited to be on the cutting edge …

Johnson has already spoken at a handful of major communication events all over the U.S. — “in Orlando two years ago and in Southern California two or three times a year,” he says. “And any of those events have between one and three thousand people. So I’ve made a lot of connections.”

This past year, he was even contacted by TikTok’s parent company, ByteDance, interested in featuring him in a 2020 Super Bowl ad. “I couldn’t because I’m a student-athlete and there are certain (NCAA rules),” he says. “But it was still so cool, to have that kind of collaboration opportunity — on the biggest marketing stage that exists.”

(While California has a new law allowing student-athletes to profit from their own likeness, branding and interstate commerce concerns forced Johnson to pass on the offer.)

But football still comes first for Johnson, at least right now. With Aggie spring ball progressing over the next few weeks, there’ll be an interesting battle among the several quarterbacks on staff, vying to fill the shoes of Johnson’s former roommate and now-graduated 2018 Big Sky Player of the Year, Jake Maier.

“The best thing that ever happened to me was ending up at Davis,” Johnson adds. “What these last three years have taught me, is that you can have a bigger role sometimes through your leadership off the field than what you do on it.”

It came as no surprise to his teammates when he was honored as UCD’s Phil Wells Teammate of the Year in 2018.

And about that communication major …

“I find myself constantly applying theories I’m learning about in class to the work I do (on Instagram) with my audiences,” he says. “And I’ve been able to teach so many of those things to my clients.”

He’s a senior making a six-figure salary. And he hasn’t really even gotten started.

Notes: To learn more about Johnson’s work with bringing online storytelling to market and how to better broadcast yourself or your product, visit the Aggie QB’s website brock11johnson.com or listen to his podcast Build Your Tribe. Follow Johnson on Instagram or TikTok at @brock11johnson. … Johnson’s younger sister, Cierra, a former soccer and track star in Mission Viejo, is a student at the Fashion Institute of Design & Merchandising in Los Angeles. Dad, Bret, played football at UCLA and Michigan State before a professional career in both the NFL and CFL. At MVHS, Johnson led the Diablos to back-to-back South Coast League and CIF Championships (2014 and 2015).